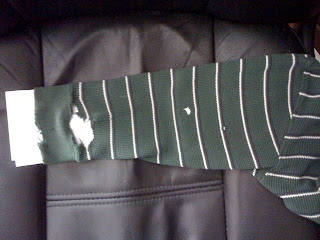 This is an example of what increased sensory processing disorder from PANDAS looks like. My son chewed the sleeves off of every long-sleeved shirt he owned last year. This is the only shirt I actually kept because the holes were smaller and it wasn't actually destroyed.


Our son had his first inoculation with hookworm in the beginning of November of 2011. He has been hosting hookworm for eleven months now.

Our son, A, is doing wonderfully. The biggest shock came to us last week after going to the pediatrician for a croupy cough and sore throat. They swabbed him and told us his strep culture was negative. Three days later, they called us to say that his slow culture came back and he was positive for strep.

The shock is because he had PANDAS last year at this time. PANDAS is Pediatric Autoimmune Neuropsychiatric Disorders Associated with Streptococcal Infections. PANDAS is essentially an autoimmune reaction in the brain to the antibodies that the child's body makes against strep. This autoimmune reaction causes inflammation in the brain and nervous system resulting in anxiety and obsessive compulsive behavior. See this linky for more information about PANDAS.

Our son had multiple ear infections in summer of 2011 which set off the PANDAS, which remained after multiple courses of antibiotics, ear surgery and more antibiotics. Many children with this condition get much, much worse if they ever have another strep infection again and they take prophylactic antibiotics for it until adulthood. Our son was on antibiotics until two weeks after being inoculated with hookworm. His PANDAS symptoms were for the most part completely gone six weeks later. We had no idea how another strep infection would affect him, but we assumed it would be very bad news.

Given the nightmare we had gone through with PANDAS the year before which is all too horribly memorable, I am completely blown away. My son had a very active strep infection, was cranking out the antibodies and we were seeing only a very, very minor uptick in his PANDAS symptoms. He was slightly more clingy and starting to go through closets, but none of it was as bad as what we'd experienced-- not by a long shot.

When he had full blown PANDAS from July to November 2011, our life had been turned into hell with his galloping anxiety, titanic amounts of separation anxiety, his obsessive and compulsive destructiveness and renewed sensory issues that were off the charts. He asked me hundreds of times a day,"Mama, are you still here?" sometimes more than two times in one minute. He could not bear for me to walk four feet away from him to throw a piece of trash in a can without him coming with me and holding my hand. He could not go in the bathroom by himself. He couldn't stand to be in our house without the lights on in every room, twenty-four hours per day. He would wake up in the middle of the night with panic attacks that I had left him. He was chewing the sleeves and necklines of his long sleeved shirts and sweaters in October, destroying every single long sleeved shirt and sweater that he owned. He was obsessed with bad things happening, telling us when we were eating outdoors during the summer and the wind blew that it was airplanes with bombs coming from Iraq that would kill us.

This horrible illness was mitigated somewhat by continual administration of antibiotics. The doctor told me had no infection of the ears or tonsils or anywhere else, but the PANDAS raged on from June until mid-November and he was on antibiotics the entire time.  At the beginning of November, we went to San Diego. Three weeks later, with no antibiotics, the PANDAS started to wane and amazingly, pretty much completely disappeared by Christmas.

Now, the issue has been that administering the antibiotics would affect the worms negatively, because antibiotics kill the gut microbiota that the worms are living on. And ironically, this has been the case. He is experiencing more anxiety and more separation anxiety as the worms deal with the affect of the antibiotics on the microbiota of his gut. He becomes more symptomatic within an hour of administration of the medication. Today is the last day of amoxicillin, thank goodness. He announced this morning, an hour after getting his dose that he doesn't want to trick-or-treat this year because it's too dangerous. We assured him that it is perfectly safe and are hoping that he will be much better shortly. He is better and better throughout the day, the longer it's been since his previous dose. I'm giving him probiotics to attempt to mitigate the damage, but of course, they cannot undo the affect of taking ten days of amoxicillin. Only time and more probiotics can do that.

But the amount of anxiety he's been dealing with and the amount of separation anxiety he's expressed has been trivial compared to what we dealt with on a daily basis last year. He's going to the bathroom alone. He's not interrogating me as to where I'm going every time I leave a room or take a bag of garbage outside. He's not chewing his shirts until they fall apart. For all of this, we are truly grateful and more than that, astounded.

A long overdue update -- one great year with hookworms!

I started writing a post back in the end of June, for my daughter's and my wormaversary at the end of June, but never got around to finishing it. We had a great and busy summer. And so, now this long belated update. I will break it into separate blog posts for each of us as I have done previously, or it will be too long to read in one sitting.

Our family had a fantastic summer. This was the first "normal" summer we have had since my daughter was born, nine and a half years ago. Both she and her brother made huge developmental strides this year and we are thrilled.  Both were very healthy all summer long.

We have been members of a community pool from before our daughter was born. She was so sick that we have never really been able to go there that much. Both she and her brother were so thin that they would start to get hypothermic if the water was below about 95°F and this despite the fact that both of them wear neoprene shortie wetsuits on top of their swimsuits. We have been trying for years to teach both of them how to swim. Well, this year it finally happened! My daughter got over her phobic reaction to having water in her face and taught herself to swim. My son took lessons and learned.

My daughter was thrilled to go to the pool with her best friend, that relationship being another huge milestone for her. They are thick as thieves and it has totally changed her life. She looks forward to going to school now, because she wants to be with her friend. She is blooming socially. A huge part of it is that the hookworms have drastically reduced the amount of anxiety she experiences on a daily basis. She is even making friends with other kids in her class and feels much more socially at ease.

I have started giving her Floradix, the German liquid iron supplement. She has been borderline anemic for a while. She could never tolerate it before because it has traces of carrots in it and she was reactive to carrots. She is not reacting now. Taking this supplement has dramatically increased her appetite. She is actually eating somewhat like a healthy child now, something that has never happened before in her life. She went to the doctor last week and weighed 56 pounds, the highest weight she has ever had in her life. She has gained at least 13 pounds since we went to San Diego the first time. This is amazing, given her average weight gain per year since her first birthday has been about two or three pounds.

She was playing with her brother the other day and they were discussing airplanes and she said to him, "I'm so glad that there are cheap airplane tickets because if it weren't for cheap airplane tickets, we wouldn't have gone to San Diego and now my eosinophilic esophagitis is better than it's ever been!" She has told me repeatedly how lucky she feels that I found out about this therapy for her and that she was able to have it.

She has gotten several foods back -- tomato, rice, and potato. She also is able to tolerate dairy much better. She's currently only eating actually eating organic butter and food that has cow's milk baked or fried into it (like a muffin or cookie), but her ability to tolerate these small amounts of dairy is dramatically better and a huge achievement.

More amazingly, she is using a far smaller amount of steroids than in the last three years. She is using about half as much Pulmicort on a daily basis and has had very little esophageal pain. She is so much better than we are able to start disambiguating her physical issues which we could never get to analyze because there was so much going on with her esophageal pain. She is sleeping much better now than she ever has in her life.

Liz
Your average INTJ generalist, polymath systems thinker who got derailed from a somewhat normal life by having a very sick kid with eosinophilic esophagitis and two and a half years later, a second kid recovering from ASD. Now lucky enough to be recovering from tons of my own autoimmune misery, including a twenty year long voyage through Sinus Hell.